Over the future – 30 years of IED in Turin

This is the title of the exhibition that will be set up at the Museo Nazionale dell’Automobile di Torino (Corso Unità d’Italia, 40) to celebrate the first 30 years of the Isituto Europeo di Design in Turin.

It was the summer of 1989 when IED, School of Higher Education in the creative field, born of an extraordinary vision of its founder Francesco Morelli, opened its Turin office, in via Bligny. From now on the Institute has experienced a rapid growth: in 1991 the site was moved to Corso Turati, then to Via Pomba and in 2004 to Via San Quintino 39, where IED is still today, except for the Fashion School, to which an ad hoc space was dedicated in corso Matteotti 11.

To celebrate these 30 years of ambitious goals and achievements, IED has decided to set up an exhibition that tells the culture of the project, focusing on the automotive, the vocation of Turin and its territory, which IED has been able to interpret making the training in the field of mobility the real strength of the Turin office. Twelve models in 1: 1 scale will be exhibited at the Mauto, presented over the years at the Geneva International Motor Show, born as a Master’s thesis project in Transportation Design and designed in partnership with the style centers of the most representative companies in the world: Abarth, Alfa Romeo, Cisitalia, Fiat, Honda, Hyundai, Pininfarina, Tesla Motors.

The exhibition will be open to the public from May 29th to September 22nd.

Entrance included in the ticket of the Mauto.

We're not around right now. But you can send us an email and we'll get back to you, asap. 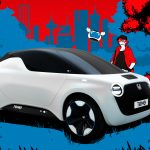